A report by the U.S. Religion Census (USRC) released on Nov. 11, 2022, is the result of a survey conducted every 10 years by the Association of Statisticians of American Religious Bodies. Dr. Scott Thumma, Director of the Hartford Institute for Religion Research at Hartford International University, was a key player in "the most comprehensive effort to document religious life in every U.S. county."

The following press release has been issued by the USRC:

Religious congregational life is alive and well, according to results of the U.S. Religion Census (USRC), which will be released Nov. 11. The USRC, conducted every 10 years by the Association of Statisticians of American Religious Bodies (ASARB), shows stability in overall numbers of congregations and adherents but substantial changes for some religious bodies.

For more information on the U.S. Religion Census, including data downloads, see www.USReligionCensus.org. For more on the ASARB, see www.asarb.org.

National summary data and for individual religious bodies by nation, state, and county, as well as a variety of maps will be available on the U.S. Religion Census website, the day of the release, Nov. 11.

The U.S. Religion Census website features a downloadable high-res map showing leading denominational family by each county in the United States, with instructions for ordering printed versions of this map for wall display. A version of this map is pictured below. 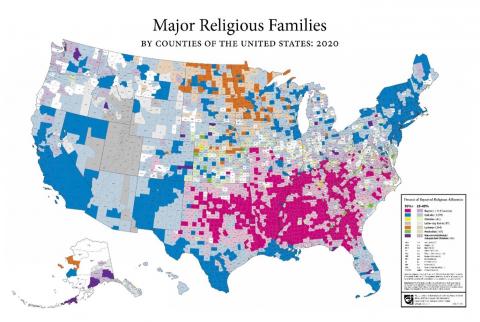 Faculty In The News General HIU News
Share this page