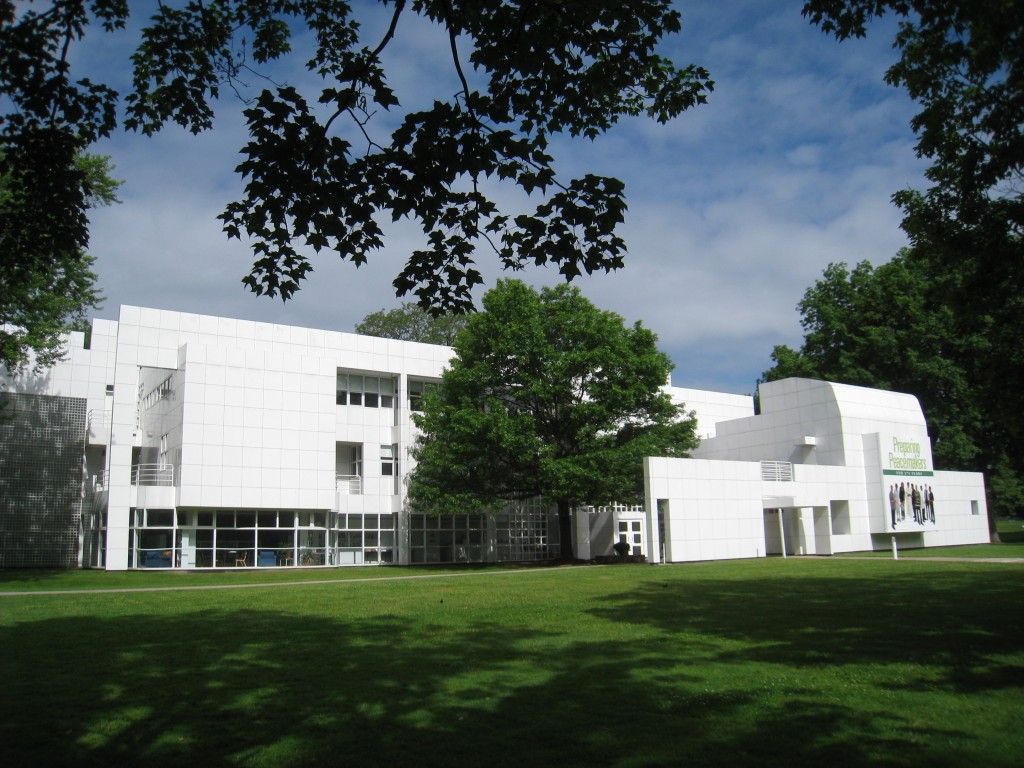 Hartford International University for Religion and Peace, called by one critic “the most unexpected building in Hartford,” is a landmark of architecture designed by New York-based Richard Meier, winner of the 1984 Pritzker Prize. Opened in 1981, then Hartford Seminary was one of Meier’s first commercial projects, and it reflects his self-professed “preoccupation with light and space.”

In the January 1982 edition of the Architectural Record, Hartford Seminary’s new building was described this way:

“If any religious symbol can be said to dominate Richard Meier & Partners’ design for the Hartford Seminary in Hartford, CT, it is the primordial emblem of creation: light. Whether silhouetted against a cloudless summer sky or wrapped in the haze of a New England winter, this low white building is an arrestingly luminous presence. … Transposed to full scale, the Hartford Seminary displays a harmonious ordering of calm, simple volumes, and a modulation of radiant spaces unprecedented in Meier’s work. … Client and architect agreed at the outset that the new building should project an image radically different from that of the Hartford Seminary’s former home, a neo-Gothic complex across the street which has since been sold to the University of Connecticut Law School.”

In its critique of the building, the Architectural Record noted the use of white and the interior windows placed throughout.

“Light seems to come from everywhere in this building to the extent that you’re not always sure of its source,” said Dr. John Dillenberger, who was Hartford Seminary’s president at the time.

The Record’s critique went on: “The building is pervaded by such reminders of the coexistence of transitory phenomena and the enduring ideal. For all its machine-tooled precision, the sleek new Seminary has a texture as inherently picturesque as its turreted predecessor across the way. There is a constant play of shimmering color and light reflected from sky and landscape in its white planes. Even the occasional irregularity that dimples the pristine surface of a steel panel is an oddly satisfying mark of human fabrication in a structure which appears to be barely planted on the ground. The building is at once a sensuous sculptural object and a nolime-tangere, announcing the Hartford Seminary’s place within the world and apart from it.”

According to a 2014 article in Boston.com by William Morgan, Richard Meier at the time of the building’s opening was considered an “enfant terrible of modern architecture, a member of a group of New York architects labeled “The Whites” for their adherence to a near-monochromatic reinterpretation of the work of Le Corbusier from the 1920s.”

Further, the article states: “The Hartford Seminary was one of Meier’s first important non-domestic works, followed soon thereafter by the High Museum in Atlanta. Not long after Hartford, Meier was awarded the Pritzker Prize, the so-called Nobel Prize of architecture. From Atlanta onward, Meier became one of the premier museum architects of our time, securing the plum American museum job, the Getty in Los Angeles, which opened in 1997.”

For more information on Richard Meier and the Hartford International University building, visit these websites.

For a tour of the Hartford International building at 77 Sherman St., Hartford, CT, contact Director of Communications Susan Schoenberger at sschoenberger@hartfordinternational.edu or 860-509-9519.