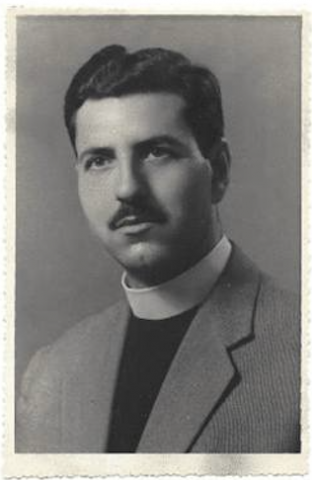 Hartford International University for Religion and Peace mourns the passing of a longtime professor of Islamic Studies and Christian-Muslim Relations who had a long and distinguished academic career.

Academic Dean David D. Grafton said, "Wadi Z. Haddad was one of the founding faculty members of the Duncan Black McDonald Center in 1973. As a Middle Eastern Christian scholar of Islam, he advanced the work of Christian-Muslim relations not only through his research, writing, and teaching, but his engaged activity in interfaith dialogue through the World Council of Churches. We are fortunate to be able to build on his legacy as a scholar, and person of faith, fully committed to positive and sustained interfaith relations."

Details are provided in the following obituary provided by his family:

Rev. Dr. Wadi Zaidan Haddad passed away on Friday, December 10, 2021. He leaves behind his wife
Yvonne Yazbeck Haddad; his daughter Susan (and her husband Richard MacPhail); his son Ramsey Haddad (and his wife Milena Hileman); his granddaughters Katherine, Genevieve, and Alexandra; and his grandsons Joseph and Simon.

Born in Al Husun, Jordan on December 28, 1928, Wadi was the eldest son of an artisan blacksmith. He
attended the Bishop's School in Amman, Jordan. After graduating from high school, he taught Mathematics and Religion and served as a Housemaster at the Bishop's School from 1946 to 1953. From 1953 to 1958, he enrolled in the joint degree program of the American University of Beirut (AUB) and the Near East School of Theology (NEST).

He earned a BA with distinction from AUB and a Diploma in Theology from NEST. During 1957-58, he earned a BD from The Episcopal Theological School in Cambridge, Massachusetts.

Wadi began his academic career as a Lecturer in Arabic Studies at Princeton University (1966-1969),
followed by an appointment as Assistant Professor in the Religious Studies Department at the University of
Wisconsin (1969-1970). He joined the faculty of the Hartford Seminary (1970-1995), now the Hartford International University for Religion and Peace, where he focused on Islamic Studies. Wadi served on the faculty of the Institute of Islamic Studies at McGill University in Montreal, Canada from 1975-1980.

In 1980 he returned to Hartford Seminary as Professor of Islamic Studies and Christian-Muslim Relations and taught there until his retirement in 1995. Wadi taught classes in theology, philosophy, and Sufism (mysticism); Islamic law (teaching classes on Sharia at the University of Connecticut School of Law); the Qur'an and prophetic traditions, classical and modern Islamic history; classical Arabic texts; and Christian-Muslim relations.

His publications include the edition of the manuscript Kitab al-Mu'tamad fi Usul al-Din, al-Qadi Abu Ya'la
ibn al-Farra: A Muslim Jurisconsult and Theologian. He also co-edited the book Christian-Muslim Encounters and was a co-editor of The Muslim World journal (1981-1995). Wadi was a member of several professional
organizations including The Middle East Studies Association, The American Oriental Society, and The American Academy of Religion.

In 1972, Wadi was a delegate to the World Council of Churches meeting on "Christian-Muslim Dialogue"
held at Brummana, Lebanon. He also served on the Presiding Bishop's Advisory Committee on the Middle East (1973-1975) and as the Representative of the Episcopal Church of the USA to the Office of Christian-Muslim Relations of the National Council of Churches of Christ in the USA (1972-1995).

Upon his retirement, Wadi greatly enjoyed gardening and spending time with his grandchildren. Long
known for his positive outlook, kindness, good humor, and humility, Wadi was much beloved by his friends and
family. He was also famed for his homemade hummus, knafeh, and grilled kabobs.

A Requiem Eucharist was held at The Chapel of the Cross in Chapel Hill, North Carolina. The service was presided over by Bishop Suffragan Anne Elliot Hodges-Copple.