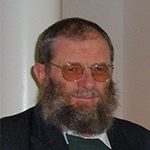 Yahya M. Michot (Belgium, 1952) joined Hartford Seminary in 2008 as Professor of Islamic Studies and Christian-Muslim Relations. He is also the current editor of the journal “The Muslim World” edited by the Seminary.

Dr. Michot has served as a consultant to various universities, international organizations, and official bodies in the UK. From 1995 to 1998, he was president of the Higher Council of Muslims in Belgium.

He is internationally recognized as a specialist of both the Iranian philosopher Avicenna (d. 1037) and the Syrian theologian-mufti Ibn Taymiyya (d. 1328). He has also explored the influence of Avicenna on later Sunnism and English thought, that of Ibn Taymiyya on pre-Wahhâbi Ottoman puritanism and modern Islamism.