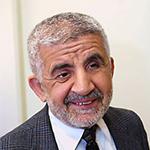 Mahmoud Mustafa Ayoub, a prominent Shia scholar and Honorary Faculty Associate in Islam and Christian-Muslim Relations at Hartford International University, passed away on Oct. 31 in Montreal, Canada, where he lived for the past several years. The HIU community mourns the loss of a great mind whose brilliance and compassion blessed us for so many years.

He will be buried on Tuesday, Nov. 2, 2021 at a Muslim cemetery. His family asks for prayers for to Allah for forgiveness and entrance into jannah - paradise. The news of his passing sparked and outpouring of tributes and fond memories from around the world.

Hartford International will long remember how Professor Ayoub spearheaded the establishment of our Imam Ali Chair for Shia Studies and Dialogue Among Islamic Schools of Thought, now held by Dr. Hossein Kamaly. This is the first chair for Shia studies in North America, a lasting legacy for Dr. Ayoub's long and successful career.

"Professor Ayoub's endorsement played a decisive role in my appointment to this position," Dr. Kamaly said. "His commitment to interfaith and intra-faith dialogue continues to inspire me, and his dedication to hard work guides me along the way."

Dr. Ayoub and his wife, Dasmalina (Lina), will also be remembered for their warm hospitality, serving cups of hot Turkish coffee to a never-ending stream of visitors at their home on campus.

President Lohr offered these words. “We join the world in mourning the loss of an incredible scholar, an amazing professor, and a dear, dear man. Dr. Ayoub was loved by all and set an example for us each one about what it means to love one’s neighbor. I am honored to have met him, shared meals with him in his home with his dear wife Lina, and to have been blessed by his many warm email messages and letters, not to mention his scholarship. The world is a better place because of Dr. Ayoub."

Professor Ayoub was born in South Lebanon in 1935 and attended a British missionary school for the blind. He received his education at the American University of Beirut (BA, Philosophy, 1964), the University of Pennsylvania (M.A., Religious Thought, 1966), and Harvard University (Ph.D., History of Religion, 1975).

His doctoral dissertation, Redemptive Suffering in Islam: A Study of the Devotional Aspects of Ashura' in Twelver Shiism in the Middle Ages turned into a book that still stands as a classic in the field.

From 1988 to 2008, Dr. Ayoub was a Professor and Director of Islamic Studies in the Department of Religion at Temple University in Philadelphia. Over his career, he also taught at the Pacific School of Religion, Berkeley, San Diego State University, the University of Toronto, and McGill University, among others.

During the early 1990s, he supervised a group project to translate Al-Mīzān fī tafsīr al-Qurʾān, a monumental contemporary commentary on the Qurʾān by the late Mohammad-Hossein Ṭabāṭabāʾī from Arabic into English. Although that project was never finished, it gave birth to Dr. Ayoub’s two-volume commentary on the early sūras of the Qurʾān.

In 1998, Dr. Ayoub helped devise and launch a graduate M.A. level program in Muslim-Christian relations and comparative religion for the Centre for Christian-Muslim Studies, University of Balamand, Lebanon.

After decades of working in leading universities nationwide, Professor Mahmoud Ayoub found a welcoming home at the Macdonald Center for the Study of Islam and Christian-Muslim Relations at Hartford Seminary — now Hartford International University for Religion and Peace. He and Lina lived on campus, attended educational events where Dr. Ayoub would often offer insightful commentary, and frequently welcomed students, alumni, faculty, and staff into their home.

Throughout his academic career, Professor Ayoub has received distinguished awards and scholarships, both for his achievements and research. Among others, he was a recipient of the Kent Doctoral Fellowship and the Canada Council Fellowship. In 1994-1995, he participated in the Fulbright Exchange of Scholars program for Malaysia. In the Spring-Summer of 2000, he undertook a research project on Christian-Muslim relations in Egypt and Lebanon, also on a Fulbright scholarship.

Dr. Ayoub is the author of a number of books including, Redemptive Suffering in Islam and The Qur’an and Its Interpreters (vol. 1 & 2). The summer of 2000 saw the release of his two-volume publication, Dirasat fi al-‘Alaqat al-Masihiyyah al-Islamiyyah in Arabic (Studies in Christian-Muslim Relations). Islam: Faith and History appeared in 2004. In addition, his articles have appeared in books and journals such as, The Muslim World, Journal of the American Oriental Society, Bulletin of the Institute of Middle Eastern Studies (Tokyo, Japan) and Islamochristiana (Rome, Italy).

Dr. Ayoub’s authority in both the scholarship and comparative study of Islam and Muslim-Christian relations, as well as interreligious dialogue, is demonstrated by the national and international recognition he has received. He will be dearly missed.